Built in 9th century, the Derawar fort stands tall in the middle of the Cholistan desert which is now known as a hallmark of Bahawalpur. It takes 2-3 hours from the Bahawalpur city to reach the fort. The road pass through some of the rich gardens before it ends up in the desert. The majestic fort can be seen several miles away from the Cholistan desert.

The main gate of the Derawar Fort as seen from the outside. There are small doors on the left side which lead to various check posts all along the fort. 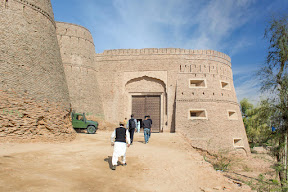 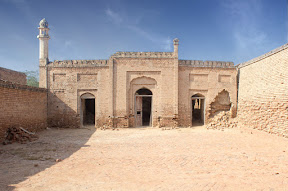 There stairs inside fort which lead down to, possibly, the deepest underground passageway at the fort. The area below is itself enclosed in the dark and rumor has it that it was a secret passageway that led directly to Noor Mahal in the city of Bahawalpur. The stairs have tracks on either side showing that the passageway was used to transport goods (or people) over a very large distance.

The remains of a dried up river bed can be seen today. The entire area was home to a river called Hakara which was known in the Vedic times as the Sarasvati. 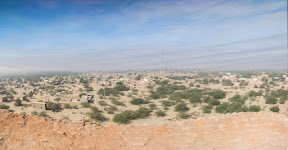 Rai Jajja Bhati of Jaisalmir first to build a fort on the site who was a Hindu Rajput. The fort was captured by Nawab of Bahawalpur, Sadiq Mohammad Khan I in 1733 and renovated it.

There are many sites which can be seen around the fort some of which dates back to the time of the Indus Valley Civilisation. A mosque close by is built on the design of Moti Masjid at Delhi’s Red Fort and offers an interesting contrast.

The Masjid outside the Derawar Fort is in good condition. Made of marble, it was built on the exact lines of Moti Masjid in the Red Fort of Delhi (India). It was constructed in 1844 AD, has three domes and two minarets. The entire structure is made up on white marble.

A Qari at the Derawar Mosque gives lessons to the kids of neighbouring villages on how to read the Quran. The children keep their copies of the Quran on small, primitive wooden stools while reading Quran. 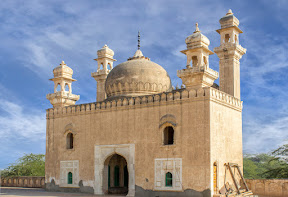 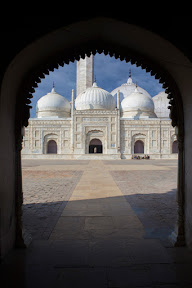 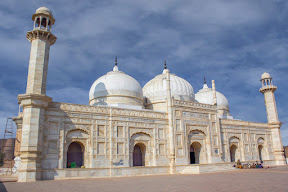 The royal graveyard of the Abbasi family is situated few yards away from Abbasi Masjid. The Abbasi family was the ruling Nawab family of Bahawalpur and all of the previous Nawabs are buried here. The graveyard is still owned and controlled by the Nawabs surviving family members. The monument is located near and opposite to the Derawar Fort. 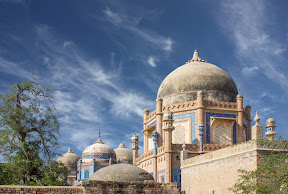 The royal graveyard of the Abbasi family, Derawar

This magnificent palace is located in a lost county of Dera Nawab Sahib, in Bhawalpur district. Once a headquarters of one of the richest princely states; today hidden in the political & public negligence. The Sadiq Garh palace was constructed in 1882 by ruler of Bhawalpur Nawab Sadiq Muhammad Khan (V) with total expenditure of 15 Lac rupees. It is said to be designed by the Italian architects. The Sadiq Garh palace complex consist of four main buildings; i.e. state secretariat building, cinema and gym, a mosque and palace itself. The palace contains 99 rooms, out of which mostly are the suits. The whole complex is fortified by a huge wall. The palace today is in worse condition, however its huge lawns are somehow maintained. According to our guide most the furniture and other stuff was either stolen or was taken away by the royal family members. Among many precious stuff stolen was the complete cloth of Kaba (Ghilaf e Kaba) which used to be hanged at the entrance of palace 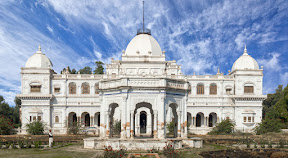 Many famous personalities remained guests of this palace; out of which are Lord Mountbatten, Muhammad Ali Jinnah, Shah Iran, Z.A Bhutto and many more. No one lives in this palace since last two decades, as it is under legal dispute among decedents of royal family. This palace is not open for common public. 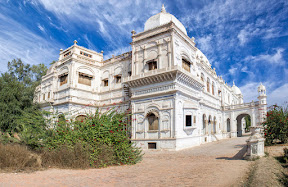 Following pictures are illustrating the mosque of palace. The calligraphy and patterns made on mosque wall were in a good condition and indeed were a master piece. 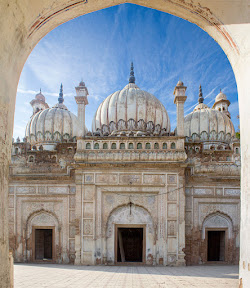 Uch Sharif city is an historical city 73KM away from Bahawalpur city near the palace called Panjnad -  where all of the Indus rivers meet. The important city have been founded by Alexander the Great. People bealive that the shrine culture started from this city.  Some of the most popular shrines in Uch are those of Bibi Jawindi, Baha’al-Halim and Jalaluddin Bukhari – all of which are concentrated in a compound known as Uch Sharif and are listed as a Unesco World Heritage Site.

Main front of the entrance leading to the darbar of Jalaluddin Bukhari. 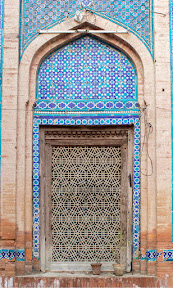 A window of darbar of Jalaluddin Bukhari.

The Tomb of Bibi Jawindi is one of the five monuments in Uch Sharif which dates back to the 15th century, the shrine was built in 1493 by an Iranian prince Dilshad. 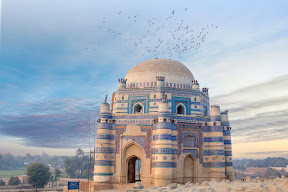 The Tomb of Bibi Jawindi
Find out more and check the PART-1 of "Explore the city of Bahawalpur, Punjab"

Around Pakistan: Gulzar Mahal in Bahawalpur 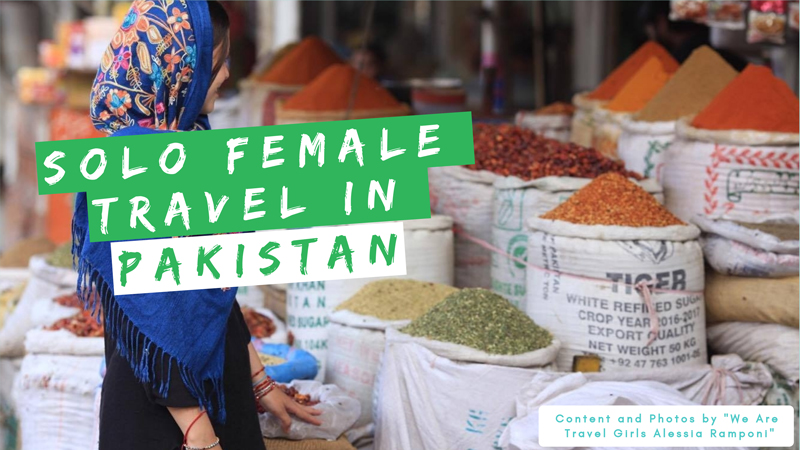 Pakistan is not a common destination for a solo female traveler. Visas can be difficult to obtain and most governments have strongly advised against travel there. Visas can only be obtained from the embassy in your country of origin, so if you are planning to travel there first, contact the Embassy of Pakistan in your country. 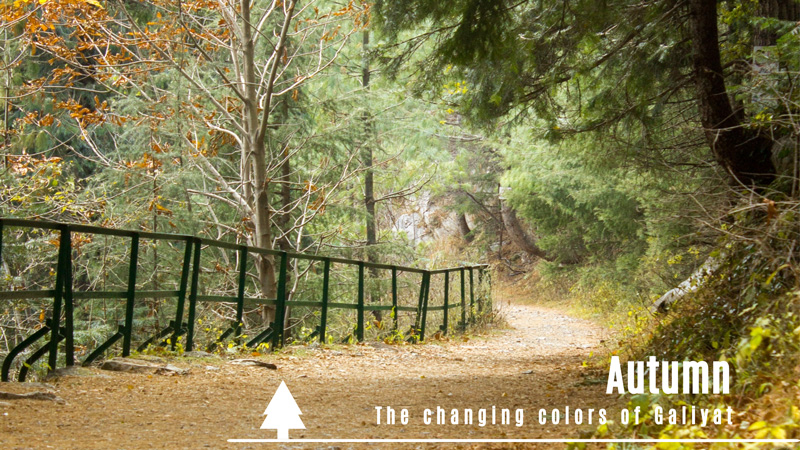 Autumn: The changing colors of Galiyat

"Why not I take the Nathiagali road to reach Islamabad?" I thought, having a cup of tea in "Bhai Sweet & Hotel". The road would be more scenic filled with many interesting places like Donga Gali, Pipeline trek, Nathiagali and Muree. Unknowing the condition of the road I started off hesitantly. 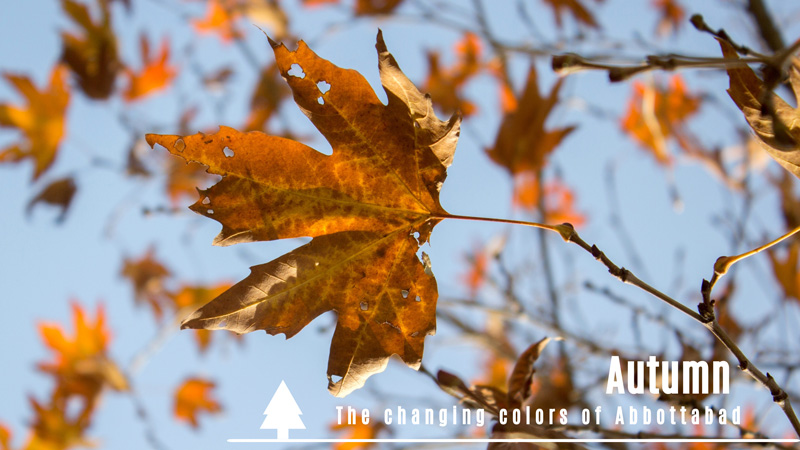 Autumn: The changing colors of Abbottabad

I had a wish to witness autumn colors for a long time and on Dec 1st, I decided to visit Abbottabad and Galiyat. It was a 12th Rabi' al-awwal evening and the country was celebrating the birthday of the Islamic prophet, Hazrat Muhammad (PBUH). The plan was to leave late night and experience the sunrise on Karakorum Highway. 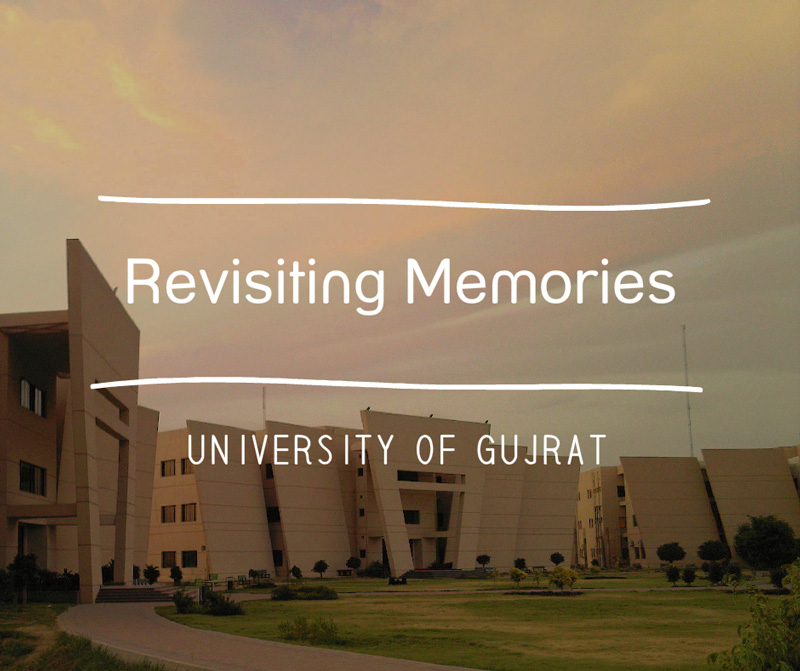 A December’s cold morning brought few class fellows back to University which they graduated four years ago. Time passed so quickly when they switched from student to professional life. 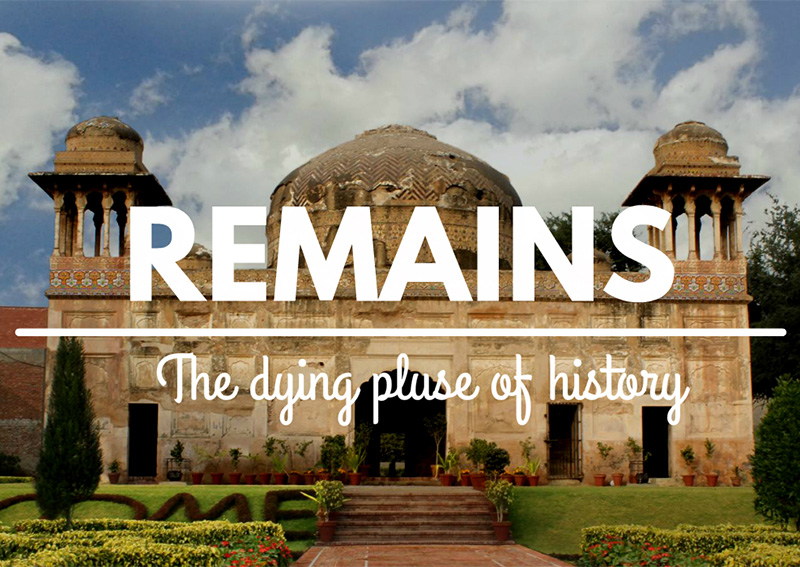 All the Empires have their footprints on Lahore, and we are going in a search where we could find those footprints and their importance in their peak times and influence on people now. The last step would be to share all of them with mutually interested people. So let’s get going. 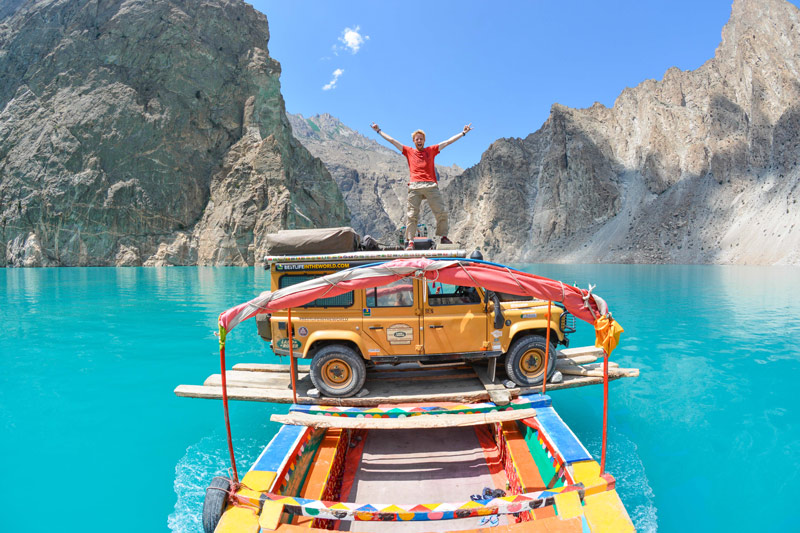 Fear. It’s both a vital gift housed by human nature and an insidious enemy of the human race. On one hand, it whispers warnings and protects us from danger. On the other hand, it has the tendency to dramatise risk, rationalise rumours, glorify assumptions and conjure terrifying truths in order to fill gaps in knowledge and experience. . In this regard, fear often places two hands over our eyes and blinds us from hidden opportunities. It closes the gate on enlightening international relationships, thrilling life experiences and character-building adventures.